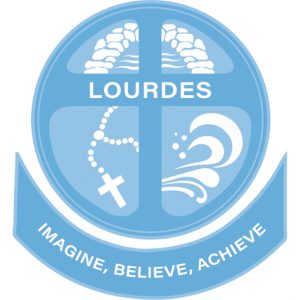 St. Bernadette was born in 1844, in the town of Lourdes, France. In 1858, Bernadette received several visions from a lovely lady near a grotto. After this lady revealed herself as the Blessed Virgin Mary, she asked Bernadette for a chapel to be built on the grounds of the grotto, and that she should drink the spring water that appeared to her.

Word quickly spread of these apparitions and masses of people came to pray. In the meantime, Bernadette was detained, interrogated, and harassed by the civil authorities as if she were a common criminal. Four years after the apparitions, the local bishop ruled that the apparitions were authentic. She eventually entered a religious house and died at the early age of 35. She was canonised a Saint in 1933.

Bernadette remained courageous, honest and faithful to God. Her example to us is of a person who was willing to devote her life to God. Her story serves as a symbol of hope, and an example of the power that one person’s faith can have on the world.

The St Vincent de Paul Society is a charity service that focus on being active and supportive around cases of poverty and inequality. Lourdes has a close and ongoing connection to the local St Vincent de Paul Society service in Warragul. Every year we try to raise money to support the local St Vinnies services and organise a whole school wishing tree in December to help make Christmas hampers for struggling families in the local community. It is an important and worthwhile charity that we try to assist and we thank our school community with the immense support that we get each year to help others in need.